MACSIM as tool for testing

MACSIM as tool for testing

It has also been shown to be an accurate tool for testing organization and performance. It has been used to test the surge capacity, and also preparedness and organization, of a major hospital in Stockholm exposed to a real scenario (the terrorist bombings in Madrid 2004) adapted to the Stockholm geography and population. The system has also been used in other hospitals in a similar way.

MACSIM has also been successfully used to test a complete emergency-evacuation of another major hospital in Stockholm in a national project on behalf of the Swedish Governmental Board of Health & Welfare. The results are under publication.

In a project sponsored by the European Union in our Italian MRMI-center, the system has also been used to study incidents within the hospital, as threats or terrorist- attacks.

Testing preparedness and surge capacity Karolinska University Hospital in Sweden. All critical functions in the hospital were set up with real resources (staff, facilities, supplies) and also real patient-load in the hospital at time for alert. All investigations and treatments where simulated in real time and with real consumption of resources. Thus, the critical capacity-limiting factors and how they interacted with each other could be determined. 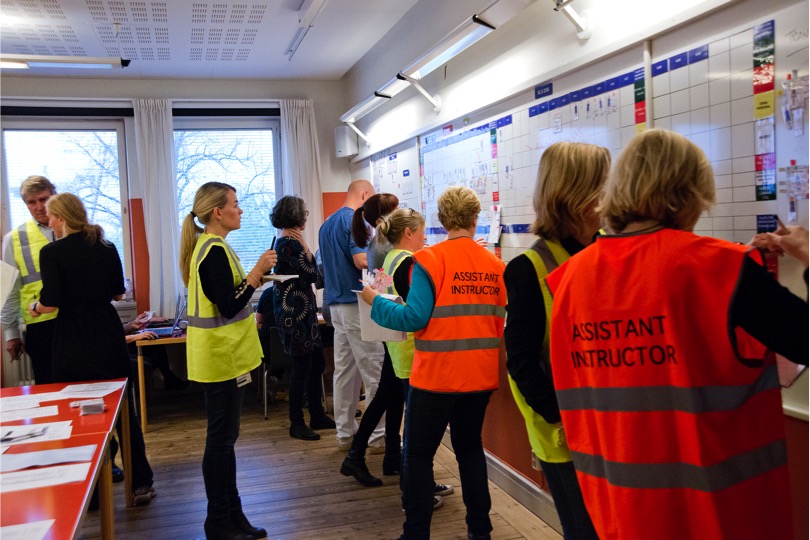 The figure below illustrates the situation in the emergency department (ED) where the horizontal blue columns in the bottom represent resuscitation/triage of severely injured and the red columns waiting times. The point where the waiting times become unacceptable and inflow has to stopped can be defined (1). At that time, there is still remaining surgical- and ICU capacity so the inflow can re-start after clearing the ED, but has to be finally stopped on point (2) because of ICU-capacity. Red boxes on top illustrate patients who have to be sent to other hospitals. From Lennquist- Montan K et al, Eur J Trauma Emerg Surg 2016, on line (with permission) 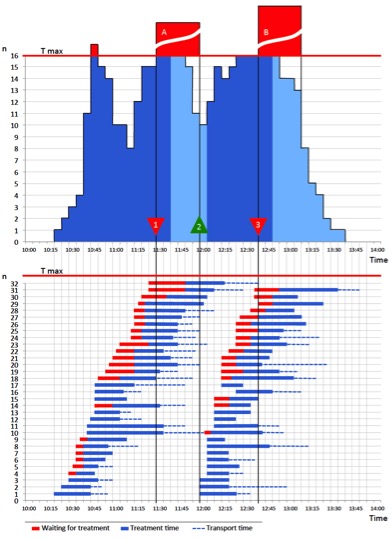 Because of the standardized design in combination with the level of detail in supply and registration of data, the MACSIM tool can in this way be used to study the effects of modifications in organization and/or resources, and also effects of training.

Thus, MACSIM makes it possible to study and measure the quality of different components in preparedness for, as well as in the response to, major incidents. It therefore has been recognized as a welcome contribution to the field of Disaster Medicine, where there - compared to other fields in Medicine - has been a lack of certified methods for quality- assurance.

A complete test-set for your own prehospital- or hospital organization, adjusted to your resources and your disaster plan, can be made available on request. We can also supply support- staff for performing a test.